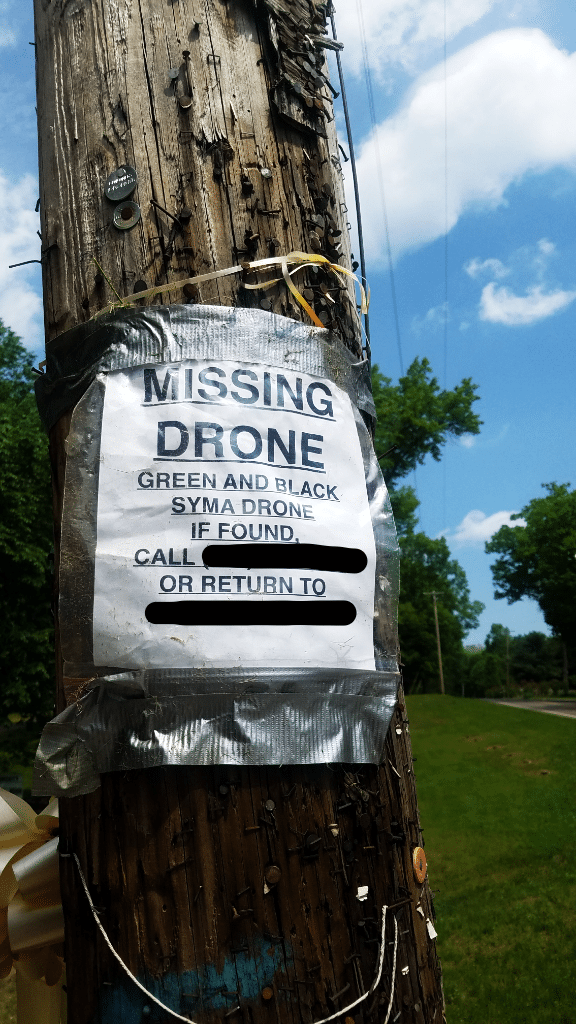 Yes, this photo is real.

This sign was posted on a telephone pole that is typically reserved for garage sales and missing pets. But, a missing drone. That's a new one. I chuckled, and I wondered if this person would actually get their drone back...or if the drone is sitting crushed into pieces in the trash can of a disgruntled neighbor.

As the barriers to access drone technology by the average consumer or small business owner fall, drones are rapidly advancing a number of industries from real estate to healthcare. To sum it up, drones aren't going anywhere. The applications seem endless, and the person with the drone can do more business for less and time money.

Get a Drone or Get Out of the Way

Real Estate - Not only do drones allow real estate agents to showcase property's more thoroughly with drone cameras (thanks to drone camera footage and AI, you can virtually walk through your future home), but drones are making property inspections easier and more complete.

Industry and Infrastructure - Drones are being used to make sure bridges, towers, pipelines, power lines, turbines, storage tanks and more are functioning properly for less time and cost than traditional inspections. Drones are even being used for land surveys and construction project inspections.

Shipping - This one is sort of a no-brainer. Amazon's been talking about this for a few years now. But, picture this. It's February and there are 5 feet of snow on the ground (lucky you if you live in a warm climate). You have a sinus infection. You do a virtual doctor visit from the comfort of your couch, a prescription is texted in from your virtual doctor to the pharmacy, and a few hours later...beep, boop, bop, boop, beep...a drone from your local pharmacy drops off your script. What a time to be alive, people!

Drone technology, as it applies to our everyday lives is just getting started. Are you in an industry that's part of the drone evolution? Or could be? Or, are you the person with a drone and the next great idea?

This is Just Cool

TIME magazine recently published a Special Report on drones, The Drone Age. TIME's special edition issue cover photo is the first to be shot by a drone. Working with Intel's Drone Light Show Team (the same team that created the drone display during the 2018 Winter Olympics opening ceremony in South Korea), Astraeus Aerial Cinema Systems, and L.A. Drones, the TIME cover used 958 drones set to display a precise shade of red, and a final drone to hold the camera that captured the epic image.

The result was one of the biggest drone shows ever produced in the U.S., so of course, it drew some attention. One Folsom, Calif., resident interviewed by a local news reporter recounted, “Up in the sky, I saw the future.”

A Year in Review: Great year. Did we set ourselves up for failure?

Finding the Role of SEM in Your Business